Music was almost universally present in ancient Greek society, from marriages, funerals, and religious ceremonies to theatre, folk music, and the ballad-like reciting of epic poetry. It thus played an integral role in the lives of ancient Greeks. There are some fragments of actual Greek musical notation,[1][2] many literary references, depictions on ceramics and relevant archaeological remains, such that some things can be known—or reasonably surmised—about what the music sounded like, the general role of music in society, the economics of music, the importance of a professional caste of musicians, etc.

The word music comes from the Muses, the daughters of Zeus and patron goddesses of creative and intellectual endeavours.

Concerning the origin of music and musical instruments: the history of music in ancient Greece is so closely interwoven with Greek mythology and legend that it is often difficult to surmise what is historically true and what is myth. The music and music theory of ancient Greece laid the foundation for western music and western music theory, as it would go on to influence the ancient Romans, the early Christian church and the medieval composers. Our understanding of ancient Greek music theory, musical systems, and musical ethos comes almost entirely from the surviving teachings of the Pythagoreans, Ptolemy, Philodemus, Aristoxenus, Aristides, and Plato.

Some ancient Greek philosophers discussed the study of music in ancient Greece. Pythagoras in particular believed that music was subject to the same mathematical laws of harmony as the mechanics of the cosmos, evolving into an idea known as the music of the spheres. The Pythagoreans focused on the mathematics and the acoustical science of sound and music. They developed tuning systems and harmonic principles that focused on simple integers and ratios, laying a foundation for acoustic science; however, this was not the only school of thought in ancient Greece. Aristoxenus, who wrote a number of musicological treatises, for example, studied music with a more empirical tendency. Aristoxenus believed that intervals should be judged by ear instead of mathematical ratios, though Aristoxenus was influenced by Pythagoras and used mathematics terminology and measurements in his research.

Music played an integral role in ancient Greek society. Pericles’ teacher Damon said, according to Plato in the Republic, “when fundamental modes of music change, the fundamental modes of the state change with them.” Music and gymnastics comprised the main divisions in one’s schooling. “The word ‘music’ expressed the entire education”.

Instrumental music served a religious and entertaining role in ancient Greece as it would often accompany religious events, rituals, and festivals. Music was also used for entertainment when it accompanied drinking-parties or symposia. A popular type of piece to be played while drinking at these drinking parties was the skolion, a piece composed to be heard while drinking. Before and after the Greek drinking parties, religious libations, or the religious the act of partaking and pouring out drink, would be made to deities, usually the Olympic gods, the heroes, and Zeus. The offering of libations were often accompanied by a special libation melody called the spondeion, which was often accompanied by an aulos player.[3][page needed]

Music occupied an important role in the Greek sacrificial ceremonies. The sarcophagus of Hagia Triada shows that the aulos was present during sacrifices as early as 1300 BC. Music was also present during times of initiation, worship, and religious celebration, playing very integral parts of the sacrificial cults of Apollo and Dionysus.

Music (along with intoxication of potions, fasting, and honey) was also integral in preparing for and catalyzing divination, as music would often induce prophets into religious ecstasy and revelation, so much so that the expression for “making music” and “prophesying” were identical in ancient Greek.

Instruments were also present in war time, though it may not have been considered music entirely. Specific notes of the trumpet were played to dictate commands to soldiers on the battlefield. The aulos and percussion instruments also accompanied the verbal commands given to oarsmen by the boatswain. The instruments were used mainly to help keep the oarsmen in time with one another.

Athens Living Museum offer a variety of cultural expepriences ranked among the best things in Athens. 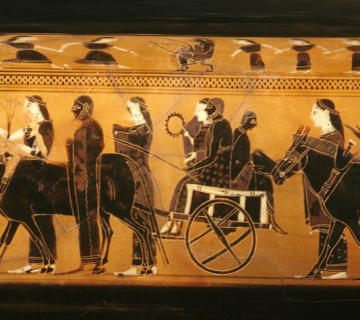 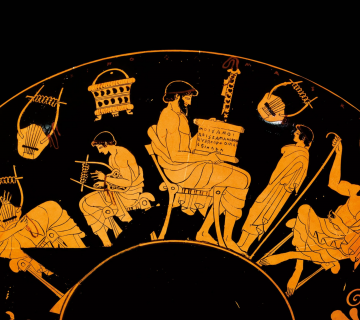 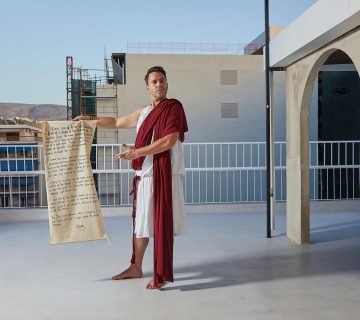 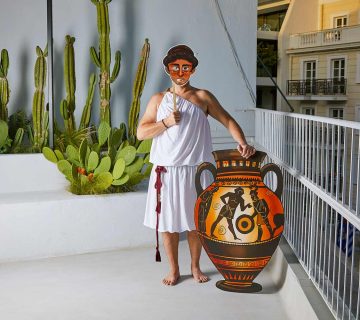 Athens Living Museum Blog: What is an Ancient Greek Symposium?